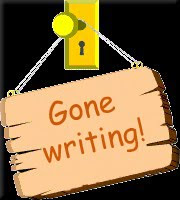 The time has come for me to limit the distractions some. There are a few projects that I need to finish up so that I can get back to work on the Gray Locke series. As much as I love perusing the world wide web, I'm afraid it does prevent me from getting anything accomplished in a timely manner.

For the curious --
Amidst all this hectic activity, I have also been debating whether or not to start work on a book of illustrated poems, or should I get on to the next Gray Locke book -- after I finish the above-mentioned projects. So, stay tuned for my progress!

Interview with C.A. Chicoine, author of the Gray Locke series.

Author’s Dialogue: An interview with Visionary Fiction author C.A.Chicoine, by author Terre Britton.
http://www.siriuspress.com/Interviews/2011/05/08/craig-chicoine/
Posted by C.A. Chicoine at 7:11 AM No comments:

I'm back to the beginning -- revising Giants of the Vale. There was a string of three days a couple of weeks ago when I was productive. But then I decided that the sub-plot of the story was getting way too complicated. So I had to scrap that idea -- which I had already invested a lot of time on. Oh, I'll be keeping some 23,000 words or so. And I put a scene back in that I had previously removed. But, a rewrite is definitely in order.

I was interviewed last week about the Gray Locke series. That will be posted online tomorrow. And for the interview, I wrote up a short bio. So, I have replaced the old bio with this new one at Goodreads, AuthorsDen and The Independent Author Network websites.

I've been overwhelmed with an excessive amount of stress these days -- but I'm feeling better. Things have a way of working out. And I'm still on my way. :)
Posted by C.A. Chicoine at 5:00 PM No comments:

It's been a busy month! It started out with a dose of reality–followed by a chaser of nostalgia. But, after the hangover wore off, I found that I survived virtually unscathed–although I can still sometimes taste the bile in my mouth.

On the creative side of life, I developed a new program to showcase the Gray Locke series on USTREAM. I'll post more about that after the first episode is put together.

The book giveaway for Gray Locke: The Witch of Clover Hill has ended. There were 972 requests -- five winners. Congratulations to those who won!

We are, once again, in the midst of another Blade Runner revival–thanks to the recent acquirement of the Blade Runner rights by Alcon Entertainment. And, as a result, I have resurrected an idea I had in the back of my mind for quite some time. Many hardcore Blade Runner fans, (alright - MOST), would probably cringe at this idea, but if given the opportunity, it would complement the film very well–while reaching a new audience. Blade Runner: The Musical. So, I put together a page, and edited a video, with samples of some of the songs from a project that I worked on back in 2009.

I've also been on a creative excursion with a friend. We are collaborating on a story together–purely for joy. There are no plans to ever release/publish the story–and there is no timetable. It's a sandbox for us to experiment and explore our creative minds in.

And finally, after a respite from writing the third book of the Gray Locke series, I've returned to it with a fresh mind. I wish I could tell you when it'll be ready, but it's a process that has its own timetable.

http://www.goodreads.com/giveaway/show/8068-gray-locke-the-witch-of-clover-hill
Posted by C.A. Chicoine at 7:02 AM No comments:


The Author's Den
Where authors and readers come together!
Posted by C.A. Chicoine at 9:09 AM 3 comments:

01 Here for You by GrayLocke

Here for You is one of two songs with lyrics featured in the book "Gray Locke: The Witch of Clover Hill," by C.A. Chicoine.

And I’ll be here for you

For you, I will defend
On that, you can depend

Musings ~ More or Less of It

I continue to strive to thrive.

I've found that some of the same things just keep repeating and repeating. Things do seem to go in cycles, eh? But, they're not worth repeating.

I had had high hopes for my last book, Gray Locke: The Witch of Clover Hill. I would have liked to have had a board game to go along with the release, (it was in the process of happening, but it fell through).

I had also planned on releasing two songs to accompany the book's release. But that fell through as well. (It's a long story that I won't get into now.) But, I had recently shopped around for musicians to perform and record them. I do believe I have one group interested in performing one of the songs. However, the other song is still soundless.

~ Venting ~
One thing that has irked me these days are ... well, some people. Like, why wouldn't the local media, (Berkshire Eagle, North Adams Transcript, The Advocate, and iBerkshires), print the press release I sent them for my book?

Since the release of my second book, I've been at work on the third one. The story itself is finished. I'm just filling in the details. Then, afterward, I'll edit it down, and so forth.

The plan, after the third book, is to continue with a story that I actually wrote before the first book. That story will be the fourth book - a script. It is a children's musical. However, at this particular moment in time, its fate is uncertain ... very uncertain. There is no question or doubt in my mind of whether or not I can write it. It can be and will be written. The uncertainty is, when will it be written. The answer to that question depends on other people.

So, that's the gist of it all these days - in the life and times of one named Craig.