Living in the Shadows

I am of the mindset that if you haven't anything positive to say, then just say nothing at all. And though there were many times that I intended to write something in this blog, it just didn't happen – for whatever reason – until now, two years later. My family, my friends, followers, and fans, I apologize. Whether you know me personally, or through my association with the Blade Runner fandom, my various websites, the Gray Locke series, or through my lyrics and music, you'd probably like to know what I've been up to – creatively speaking.

Over the past two years, I have created a couple of websites (Hendricks Head Lighthouse and The Casper Portal), written a fanfiction story (Blade Runner: The Peter Griffin Cut), and copy-edited two books for fellow author and artist, J.B. Chicoine, titled, Portrait of a Girl Running and Portrait of a Protégé. And I have many works-in-progress – all with so much potential.

Other than that, I have organized some of my older projects – transferred handwritten notes into digital files – and continue to add new ones to a flash drive.

The creative juices are still flowing. Only, these days, it comes out in trickles. I find it easier for me to explain things using metaphors and analogies. 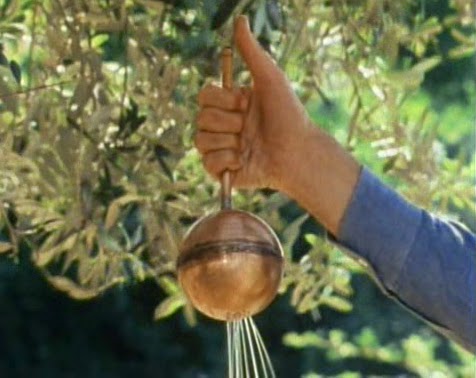 Imagine, if you will, that I have a device in my hand that holds the creative juices that flow through my soul. A clepsydra, or water thief. As Carl Sagan described in one of the episodes of his television series, Cosmos, “This is the so-called water thief – a household implement that people had used for centuries. It's a brazen sphere with a neck and a hole at the top, and a set of little holes at the bottom. It was used as a kitchen ladle. You fill it by immersing it in water. If, after it's been in there a little bit, you pull it out with the neck covered, the water is retained. [Then, once you uncover the hole at its neck,] the water trickles out the little holes making a small shower.”

Now, imagine a miniature carousel – as seen from above. And, instead of horses, there are bowls in their place. In the center of this allegorical carousel of dreams lies an extra large bowl. Then, surrounding it, there is a ring of bowls. And, surrounding it, another ring of bowls – yet even smaller. And then the outermost ring is yet smaller still. Each of these bowls represents a project – a story, poem, song, etc. For example, the extra large bowl in the center represents those ideas of which I don't know will work or don't know exactly what to do with at the moment. Those ideas are for another day. Then, the bowls in the innermost ring contain such projects as the Gray Locke series, a comedy, a psychological drama, and a musical. The medium-sized bowls represent a collection of short stories, a collection of poetry, a sci-fi graphic novel series, and a fanfiction story. The many smaller bowls on the outermost rim contain music and lyrics.

As the carousel turns, I hold the clepsydra above the empty bowls and release my thumb from the hole at the top of the neck. And the water trickles out the little holes – the tiny streams of water filling each one of the bowls. But they don't quite fill the bowls, because the carousel is turning, only allowing a smidgen of water to each of them, while the bowl in the center spills over with excess. When the clepsydra is emptied, I dip it once more into the well of my soul and repeat this painstaking process.


So, what's the difference whether I am in a blissful state or not? I am still creating, right? Well, yes, I am still writing. Only, it takes longer and it takes more energy. When I am blissful, it is like I am fully charged – with an endless resource of energy. And there is more energy to invest in each one of the projects. In the state I'm in now, I haven't the energy to put into one project. And I don't believe it's a motivational issue. It is something else. That, I will call energy for now. And the source of this energy is love. Love is a stabilizer. When in love, all the things around you can be a source of inspiration. True love is bliss.

That is what I feel is missing – the stability to slow down the carousel. And to stop it long enough so that I can finish a project. When each project has had enough turns around the carousel, it is time for it to get off so that another can have its turn. But, when it spins out of control, there is nothing that I can do but wait it out. And that is time lost.

In short, I work whenever I can, and on whatever I am in the mood to work on at the moment.

Currently, I am copy-editing J.B. Chicoine's latest story, titled, Blind Stitches. After that, I plan on re-writing a screenplay I wrote back in 2011, titled, The Dreamscaper, into a story format.

Been doing a lot of reading as well, (I'll have to update my Goodreads reading shelf).

Other than that, as I've said here already, I've been writing what I can, when I can. And I do find it excruciatingly frustrating – beyond words.

In regards to my last blog entry, there has been one change. The Gray Locke story, titled, “Giants in the Vale,” is basically finished. However, I decided not to use that story in the series. It may be resurrected in some other fashion in the future. The third story in the Gray Locke series is yet to be titled and is a work-in-progress. I can tell you this much about it though, it takes place in Maine – at Gray's grandmother's summer home. And it involves a lighthouse. And something very spectacular happens between Gray and Alexandra.

Although I am in a dark place right now – where love is nonexistent – I will continue to dip the clepsydra into the well of my soul and sprinkle the pages of my copious work with my creative juices, with the hope that, given time, my projects will see the light of day.